Limpopo Safaris in South Africa exist since 1996, combined with the involvement of others deeply interested in nature and wildlife conservation, has led to a hunting area spanning over more than 55.000 hectares. Limpopo Safaris is situated in the beautiful Limpopo Valley in the Limpopo Province, bordering Zimbabwe. Wide variety of antelope with four of the big five, missing lion. Our camps:Limpopo safaris Riverview Riverview camp is a luxury lodge. It has a unique position on the banks of the Njelele River with a fantastic view over the river with a lovely atmosphere. Accommodate 16 guests. Limpopo view Limpopo view is [...]

Trophy Hunting & Photographic Safaris in South and Southern Africa. Kido Safaris was established in 1991 and we are currently based on a private big five game reserve in the heart of Zululand Rhino Reserve in KwaZulu-Natal, South Africa. The Reserve is a Big Five Game Reserve and also hosts among others, elephant, rhino, lion, leopard, buffalo, cheetah, hyena and plains game animals that are native to the area. Kido Safaris are tailored to meet each clients individual requirements, by offering trophy hunting of more than forty species, specialised photographic safaris and adventure filled excursions. We pride ourselves on offering quality [...]

Motsomi Safaris is a family-run safari outfit by Pieter & Ria Potgieter. Both being nature lovers and Pieter being an avid hunter decided to share their love for the African bush, with people equal in their passion for nature. The sole purpose of Motsomi is to have our clients back as friends by giving them an unbelievable African experience. All safaris are fully guided, customized and tailored for every hunter and observer to make your dream come true. We have a professional & highly skilled team of Professional Hunters, trackers and skinners that will adhere to fair chase principles & ethical [...]

FG South African Safaris operates in the Eastern Cape. Your host and professional hunter is Franco Giulietti who shares with you his experience of over 30 years of hunting. Franco has also represented South Africa twice at the World Shooting Championships and walked away with gold medals both times. We offer packages for the first time hunter, as well as for the more experienced hunter. Should you have a special request, we tailor-make a package to suit your specific needs and budget. P.O.Box 19555 LINTON GRANGE 6015 Tel/Fax: +27 41 360 6758 Cell: +27 82 644 2534 Email: caccia@fgsafaris.com Website: www.fgsafaris.com Area: Eastern [...]

Taxidermy Africa is owned and run by John and Cathy Peacock and Jéane Grieve. John and Cathy moved to the Eastern Cape in 1989 and started the taxidermy studio with Cathy’s father, Terence Coffin Grey, as our consultant. Our long association with the game industry and personal hunting experience in Zimbabwe, Botswana and South Africa gives us a sound background for reproducing lifelike African trophies to world class standards. Terence Coffin Grey, our consultant, is one of the pioneers and a doyen of the taxidermy industry in Southern Africa. He has more than 70 years experience in both commercial and museum [...]

Fijnbos Safaris Farm is a 1200ha game farm situated in the Western Cape, about 8 kilometres from Hopefield and about 130 kilometres from Cape Town. Two professional hunters can assist with a truly unique hunting experience. If hunting is not for you, we offer game drives which are even more beautiful in the flower season. The farm is an experience that the whole family can enjoy. We provide accommodation in the hunters hut, a two bedroom thatched-roof house overlooking one of the watering holes. Outfitter: Andrew Loots Professional Hunter: Andrew Loots / Migael Loots www.fijnbossafaris.com andrew@fijnbossafaris.com Andrew 0833010389 Adrie 0828903076 Game: [...]

2013, Still growing, with excellent concessions in what have been our main destinations since 1994, South Africa and Tanzania. Mozambique and Zimbabwe are still available on request with however limited quota available. We have recently added Cameroon to our portfolio, where we run all bookings for a concession in the Rain Forest and 2 concessions in the Savannah area. This allow us to offer from Bongo, Sitatunga, Dwarf Buffalo to Lord Derby Eland, Roan and savannah buffalo, not to forget elephant as well as lots of duikers and other antelopes. I know your needs and expectations so well when it comes [...] 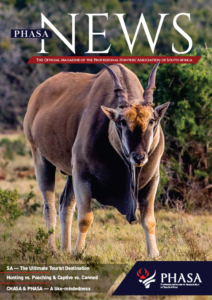