Get yourself a copy of the book today!

R30 is donated to PHASA for each copy that you buy.

The former UN Convention on International Trade In Endangered Species of Wild Fauna and Flora (CITES) Secretary-General (1982-1990) and Switzerland-based IWMC-World Conservation Trust President, Mr Eugene Lapointe, endorses the book in his foreword, “Western Celebration of African Poverty has something for everyone who cares about wildlife, wild places and human dignity in the developing world. I cannot recommend this book highly enough.”

Why  Koro wrote the book

“I wrote this book in order, to truthfully and fearlessly tell Africa who and what is blocking it from implementing successful conservation and development initiatives that benefit both its people and wildlife’s wellbeing,” said Emmanuel Koro. “I want all Africans and friends of Africa worldwide, to know that it is the outsider influence that continues to scandalously block any scientifically justified grounds for African countries to benefit from their wildlife use, through trade.  I call these trade bans unjustified trade sanctions, which have laughably failed to save a single rhino and elephant!”

Without community support, poachers are less harmful to wildlife. But with support from communities, poachers kill more wildlife than they do when communities don’t support or collaborate with them. That’s why in the SADC region we have the wildlife conservation slogan: Use It Or Lose It. Koro correctly observes that the fate of African wildlife lies in the hands of communities co-existing with it.

He observes that the animal rights groups are not progressive because they continue to violate human rights by failing to balance animal rights with human rights. They put animals above human beings. He also notes that the animal rights groups are cowards who tell the African race (black and white Africans) not to hunt, not to trade in ivory, rhino horn, including live elephants and rhinos, yet they don’t tell non-African race countries to stop trading in climate-change causing oil that harms both wildlife and people worldwide.

Koro also provides new thinking around conservation and development by questioning why some animal rights groups captured African journalists and media outlets blindly blame African governments for failing to grow their economies, yet they are the ones who ironically lobby to prevent their governments from economic growth through publishing stories that oppose hunting, ivory and rhino horn trade, including trade in live elephants and rhinos, etc. Where on earth can a country grow economically without sustainable trade in its abundant resources as oil-producing countries do? Koro warns Africans not to allow Western forces to continue “green-washing” them into poverty. He notes that if this trend doesn’t stop Africa will needlessly continue to be resource-rich but poor. 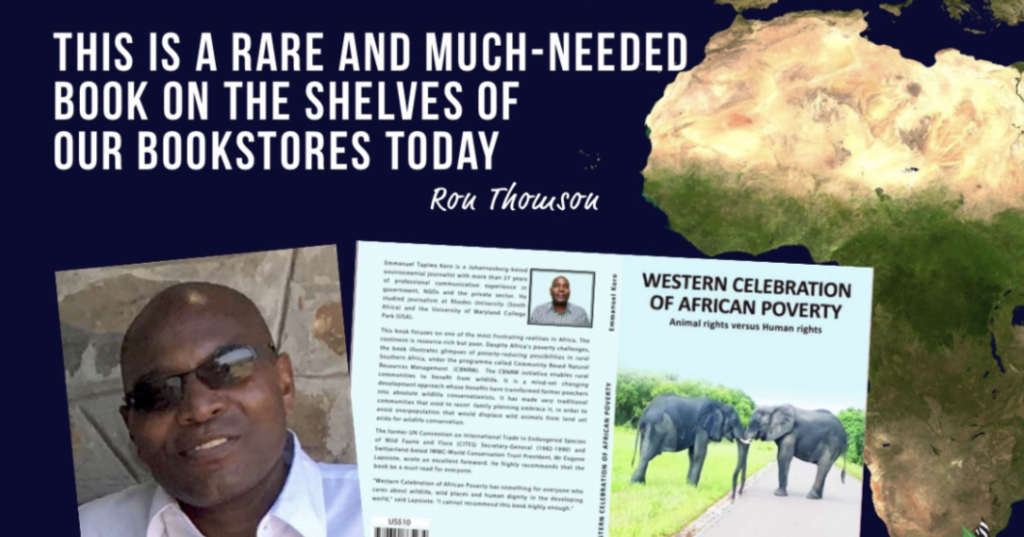