Report back from China

A first time show in the Asia Pacific, the China Hunting Show as expected received mixed results from exhibitors and safari outfits. As a new and potential market that can possibly expand on South Africa’s wildlife success story. The Chinese International Hunting Tourists will require more effort and long-term nurturing than other traditionally hunting based cultures, such as those found in Europe and America. Regardless, what the feeling was on the floor, the China Hunting Show certainly gave many an eye opener to a disciplined, organised and courteous Chinese people who welcomed all who visited.

The China Hunting Show was a first-time collective exhibitor within The Lifestyle Show. The Lifestyle Show predominantly catered for the outdoor enthusiast who enjoy boating and fishing. The Lifestyle Show was held at The Shanghai National Convention and Exhibition Centre. This colossal building has eight separate wings and hosted three separate shows including the Lifestyle Show. The China Hunting Show which had a dedicated area within the show had a few challenges and hurdles that any first-time event is predicted to have. South African Outfits had the strongest representation at the show with other outfits from neighbouring countries Namibia and Zimbabwe, as well as Scotland, Spain, New Zealand, Russia and Belgium all promoting hunting tourism.

The Professional Hunters Association of South Africa (PHASA) was well represented by their president Dries von Coller whom engaged with numerous hunters and hunting clubs from China. South African outfitters expressed their gratitude towards PHASA for their presence at the show and for standing by their members especially in such a new and unknown market. After discussions with various members and outfitters who exhibited at the show the following key points of opportunities and challenges were identified.

An estimated 1 000 to 2 500 people passed the various booths over the four-day show depending on booth locations. Most exhibitors reported the greatest number of visitors on Thursday and Friday. These first two days of the show which coincided with two other separate shows (The Food and Health Ingredients Show and the Shanghai Import Export Show) seemingly capitalised on the extra foot traffic derived from these shows.  A few exhibitors felt that the Hunting Shows marketing campaign was focused more on the exhibitors, rather than attracting the local Chinese market to the show. Of the exhibitors we spoke to, none had any confirmed bookings but expressed that they had received a lot of interest and had distributed in excess of 200 brochures during the four-day show.

What was evident during the show is that there certainly is a desire to travel to South Africa, however crime, general safety and the language barriers were the greatest restricting concerns expressed by attendees.

When asked whether they would return the general consensus was that most outfitters would give it a few months to see if any bookings materialise before making a decision. All those who mentioned they would return described this market as being a new and developing market that requires long term nurturing and brand exposure. They expressed a profound optimism to the long-term viability of promoting hunting in China. When asked what their future marketing strategy would be, they all prescribed to a wait and see approach. 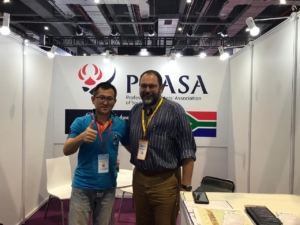 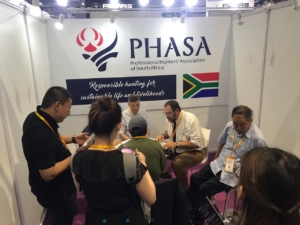